From Dallas Tx to Wake Forest could be a sleeper in a right situation.
//youtu.be/_zhaIqNVwEk

The sprints were done in 30 degrees and small snow flakes…

You have to remember those were pre draft notes and those times were in high school = ht or wind aided.

Harris ran track at Duncanville High School in Texas and had a few of the fastest high school 100 meter times in the state for 2009. I read in a few spots he supposedly ran 10.09 (obviously that’s wind-aided and hand-held) which I find difficult to believe. However he did run a documented 10.34 / 100 meters and 21.24 / 200 meters. If we assume those were hand-held that still puts him sub-10.6 and sub-21.5. He reminds me a bit of UTEP’s back, Donald Buckram. Buckram was also a Texas high school running back and track athlete with bests of 10.25 (hand-held) in the 100 meters. Buckram didn’t have success until later in his career and not against a team the caliber of Virginia Tech. It would seem Harris is pretty talented and kudos to the Wake offensive line.

I do believe if he would put his focus on track he could be a legit 10.2 or better guy. 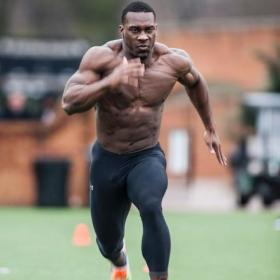